By these parameters, we can easily predetermine the efficiency and regulation of the transformer at any power factor condition as well as at any load condition. This method of finding the parameters of a transformer is called as an Indirect Loading Method.

This tutorial enumerates how to perform these tests, how determine the equivalent parameters from test data and significance HV or LV side in which the calculation to be performed.

Open Circuit or No Load Test on Transformer

As the name itself indicates, secondary side load terminals of the transformer are kept open and the input voltage is applied on the primary side. Since this test is carried out without placing any load, this test is also named as No Load Test.

How to Perform Open Circuit Test?

The open circuit (OC) test is carried out by connecting LV side (as primary) of the transformer to the AC supply through variac, ammeter, voltmeter and wattmeter instruments. The secondary side or HV side terminals are left open and in some cases a voltmeter is connected across it to measure the secondary voltage.

The primary side voltmeter reads the applied voltage to the transformer, ammeter reads the no load current, wattmeter gives the input power and the variac used to vary the voltage applied to transformer so that rated voltage is applied at rated frequency. The OC test arrangement of a transformer is shown in below figure:

When a single phase supply is given to the transformer, the rated value of the primary voltage is adjusted by varying the variac. At this rated voltage, the ammeter and wattmeter readings are to be taken. From this test, we get rated voltage VO, input or no load current IO and input power WO.

We know that, when the transformer is on no load, the no load current or primary current is very small, typically 3 to 5 percent of the rated current value. Thus, the copper loss in the primary winding is negligible.

Once the power factor is obtained, the no load component currents are determined as:

When the transformer is operating on no load, the current drawn by the shunt or parallel parameters is very small, about 2 to 5 percent of the rated current. Thus, a low current will flow through the circuit during OC test. In order to be readable by the instruments, the measurements of voltage, current and power must be performed in the low voltage side.

And also, low range current coils and low range ammeter must be selected. The power factor of the transformer on no load is too low. which is typically below 0.5 . So, in order work with this low value, a LPF watt meter is selected. The equivalent circuit obtained by the OC test is shown below: 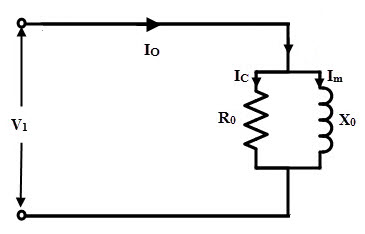 This test is performed to find series branch parameters of an equivalent circuit such as equivalent impedance (Zo1 or Zo2), total winding resistance (Ro1 or Ro2) and total leakage reactance (Xo1 or Xo2). Also, it is possible to determine copper losses at any desired load and total voltage drop of the transformer referred to primary or secondary. In this test, usually LV winding is shorted by a thick wire. And the test is conducted on the other side, i.e. HV side (as primary).

How to Perform Short Circuit Test?

In Short Circuit (SC) test, the primary or HV winding is connected to the AC supply source through voltmeter, ammeter, wattmeter and a variac as shown in figure. This test is also called as Reduced Voltage Test or Low Voltage Test. As the secondary winding is short circuited, at rated voltage, the transformer draws a very large current due to its very small winding resistance.

On the other hand, if we short the HV terminals by connecting measuring instrument on LV side, voltage in the secondary is zero. Therefore, the current flow through HV side is very high (as VA rating is constant) compared to the LV side and hence it will cause to burn the transformer.

During this test, by varying the variac slowly, we apply a low voltage to the primary typically 5 to 10 percent of the rated voltage to cause a rated current to flow in both primary and secondary windings that we can observe on ammeter reading (in some cases, the secondary is shorted through an ammeter). At this rated current, we have to record the voltmeter (Vsc), ammeter (Isc) and wattmeter (Wsc) readings.

In this test, the current flow is rated value and hence no load current is very small and is 3 to 5% of the rated current. In other words, the voltage applied to the primary winding is very low, thereby the flux level in the core is very small. In turn there is negligible core loss. Therefore, the no load shunt branch is considered as absent in equivalent circuit of this test as core loss is negligible.

As the iron or core losses are function of voltage, these losses are very small. Therefore, the wattmeter reading shows the power loss or I2 R loss equal to the full load copper losses of the whole transformer.

The equivalent circuit obtained from this test is shown below. 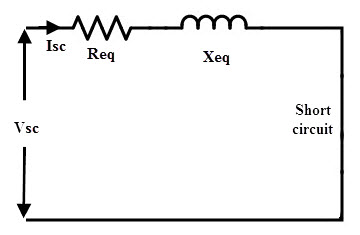 It should be noted that, before calculation of parameters, you must be aware in which side (primary or secondary) the test reading being recorded. Suppose if the transformer is step-up transformer, then we carry out the SC test on secondary side (HV side) while primary or low voltage side is shorted. In such case, we get the parameters referred to the secondary from calculations such as R02, X02 and Z02.

If it is a step-down transformer, we get the parameter values as R01, X01 and Z01 because the meters are connected to the HV side of the primary.

Calculation of Efficiency from O.C. and S.C. Tests

Suppose the copper loss at full load is Pcu (since x =1),

Then copper loss at x per unit loading = x2Pcu

Therefore the efficiency of the transformer is

In the above efficiency equation, the core or iron losses and full load copper losses are found by OC and SC tests.

For a fixed voltage in the primary, the secondary terminal voltage will not be maintained constant from no load to full load. This is due to the voltage drop across leakage impedance which magnitude depends on both degree of loading and the power factor.

Where Chronic Diseases Are Most Prevalent in the US